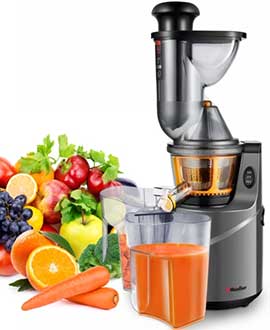 Mueller Austria Ultra Slow Cold Press Juicer is designed to make juices of all kinds. Engineered in Germany and built with quality in mind, the Mueller Ultra Juicer was designed and tested through three professional grade inspections to last longer than many others on the market. With an industry leading 2 Year no hassle Warranty + 2 additional Years if you register your product with the manufacturer.

The following are the main features of the Mueller Austria Ultra Slow Cold Press Juicer.

This is attractively designed vertical slow juicer brings onboard all the great qualities of vertical slow juicers in a neat and fairly compact design. One of the advantages of vertical juicers is how some of them not only clean themselves partially, but they’re also self-feeding. This means, you simply drop the produce through the hopper’s feed opening and a combination of gravity and the auger screw handles the rest, without you constantly having to use the food pusher. To make this feeding even easier the juicer comes with a 3-inch feed chute to easily accepts large pieces of fruits and vegetables to greatly reducing prep times. It also has a smaller feed chute incorporated to make juicing smaller fruits & veggies much easier.

The juice is first extracted through crushing stage and it is then squeezed during the second pressing stage through a juicing screen. There’s a convenient flap attached to the juice spout, which lets you release or stop the contents within the juice bowl from flowing out of the juice spout. The built-in safety sensor button will not let the juicer operate if all the parts are not correctly installed and attached. This greatly reduces any possibilities of accidents.

The 150 watt unit juicer with its low 60 RPM minimizes the noise by squeezing slowly rather than grinding at high speed like centrifugal juicers. This extract more juice, vitamins and minerals than centrifugal juicers. Drier pulp equals less foaming, no clogging and easier quicker clean-ups. It also includes a reverse switch in case your food gets stuck.

There are a lot of parts to clean. Cleaning would be super easy if the pulp chute was designed better so users could access it more easily to clean. The included brush is helpful and does a good job of cleaning the metal juice strainer.

At the time of this write up, there were 55 reviews online with an overall rating of 4.0 out of five. Many reviewers had many positive things to say about the juicer that it’s fairly quiet, it squeezes every last drop of juice from what you put in it, making the pulp super dry. It was also mentioned several times that this juicer makes really good juice and is very well made especially considering the price.

On the other hand some users reported that you have to push down the produce as it won’t pull it in like some other juicers, so you can’t walk away. The chute gets clogged sometimes, especially with leafy green. It’s got a lot of parts and it does take time to put together and take apart to clean after every use. It would be easier if Mueller made the alignment “red” dots bigger and brighter so its easier to see. Some users also complaint that the juice comes out very thick filled with pulp.

After reading all of what these reviewers had to say about the juicers we found that most of them were fairly positive with only a few negative ones. The majority of users found that this product performed exactly as stated and expected. They agree you can’t beat the price and you get what you pay for: A juicer that works well, far better than most of the cheaper ones out there, but not as versatile as premium juicers like from Omega or a Hurom.

The Mueller Austria Ultra Slow Cold Press Juicer brings onboard all the great qualities of vertical slow juicers in a neat and fairly compact design for less than $100. We would recommend this unit under $100 if you are willing to spend the extra time cleaning and filtering the juice.